After The Fall por Tobias Buck 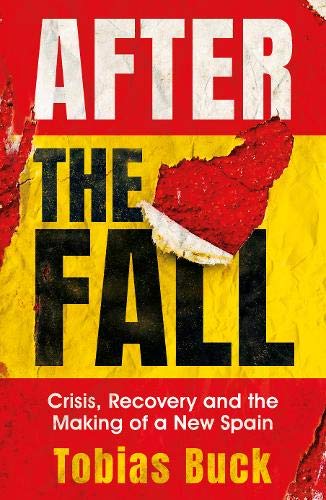 Tobias Buck con After The Fall

Críticas Mixing forensic reporting with insightful analysis, AFTER THE FALL captures the chaos of Spain's turbulent recent history with aplomb . . . a superbly documented, diligent account on Spain's recent travails - and its slow, painful route out of them (Oliver Balch FINANCIAL TIMES)Buck understands economics, but he also understands people. Spain's crisis is told as an engaging story of human folly. This is a superb book about a fascinating country - an easy read about difficult times (Gerard DeGroot THE TIMES)An elegant and insightful examination of Spain . . . the book goes beyond politics to offer a deeply sympathetic portrayal (Matthew Campbell THE SUNDAY TIMES)Tobias Buck belongs in the distinguished lineage of writing about Spain that was so brilliantly started by Richard Ford. Much like Ford in the 1830s, as clear-sighted and unflattering as deeply sympathetic to the many charms of the country and the predicaments of its people, Tobias Buck has written a most accurate account of what Spain looks like right now and what seemingly insurmountable challenges it is having to live up to . . . required reading (ANTONIO MUÑOZ MOLINA)When Spain ran the gauntlet of Basque terrorism and military subversion to reach democracy, it garnered universal admiration. In the years that followed, that image was tarnished by endemic corruption but countered by the spectacular international impact of Spanish companies. When Tobias Buck arrived in 2012, Spain was in the midst of an existential crisis. The financial crash, political corruption, the mismanagement of the Catalan independence movement and the impact of the crisis on ordinary Spaniards are perceptively analysed in his illuminating and elegant account. It is a grim story but a treat to read (PAUL PRESTON) Reseña del editor Tobias Buck arrived in Madrid in December 2012, in time to celebrate the bleakest Christmas the city had seen in a generation. Capital and country were reeling from a series of economic shocks that had brought Spain to the brink of ruin. The housing boom had dramatically turned to bust, a large chunk of the nation's banking system was in state hands, businesses were closing across the country, debt was spiralling out of control and unemployment levels had reached a record high.AFTER THE FALL presents a rich and vivid portrait of contemporary Spain at a critical moment in the country's history. The book tells the story of Spain's long boom and sudden bust, the brutal economic crisis that followed, and the political and social aftershocks that reverberate to this day. It explores the origins of the separatist movement in Catalonia, and its bitter clash with the Spanish government that culminated in a failed secession referendum and a divisive declaration of independence. It looks at the legacy of the Civil War and Franco dictatorship, and the continuing struggle over historical memory in Spain today. Based on five years of reporting and hundreds of interviews, AFTER THE FALL takes the reader from the offices of power in Madrid and Barcelona to the villages of the Basque country, still haunted by the memory of political violence, and to the towns of Andalusia, where an entire generation has seen its economic hopes shattered. It describes how the country has been changed by the experience of migration, and why - after decades at the margins - the far-right eventually made a return to Spanish politics. For all the problems and challenges facing Spain today, we see that amid the ruins of the crisis, the search for a new Spanish model is already underway. Ver Descripción del producto